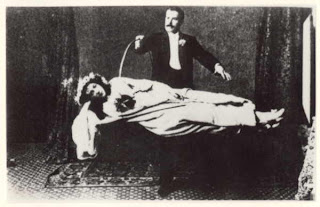 The Mascot Moth is an illusion that was created by David Devant in the early 20th century. Here's the Magicpedia entry for it:
"Devant considered The Mascot Moth to be his masterpiece. In full view of the audience and in the center of a lighted stage, he makes the lady disappear. As soon as the conjurer attempts to grasp the moth-girl, she immediately vanishes out of sight, although the figure is not concealed in any way during the trick. In performance the illusion was spectacular. The children's writer E. Nesbit featured it in her 1912 play, The Magician's Heart. It was reconstructed nearly a hundred years later for Doug Henning's show Merlin by Jim Steinmeyer and John Gaughan. There is a story about it in Steinmeyer's book, Art and Artifice."
The only video I can find of it is the Merlin television ad below. The Mascot Moth is the final illusion at the end of the video.

Devant was a terrifically well known conjurer in England, the partner of J. N. Maskelyne, proprietor of the Egyptian Hall in London. They were both pretty fascinating fellows.
Click Here To Read Magicpedia's Full Entry On David Devant.

Pull Me Out Of A Hat